Deadpool Takes Risks To Combat Superhero Fatigue, And It Pays Off Big

The story behind the making of Deadpool is arguably just as compelling as the story in the movie. The long, complicated struggle to get this movie made was an anomaly in an era of comic book movie adaptation overload. But in the early stages of development, few would have predicted that this movie was even going to get made, let alone go on to shatter box-office records and garner some critical accolades along the way. So how did this happen? How did Deadpool break all the rules and end up making the box office its bitch? It never would have happened without having the balls to take some risks.

At the time this project began development, the industry landscape was different. This type of movie wasn’t supposed to happen: an R-rated superhero movie based on a character most the general public has never heard of? Not exactly a slam dunk in the minds of the studio heads. As a result, Deadpool lingered in development hell for ten years before finally coming to fruition. Ten years! During that time, changes among studio personnel and a historically awful box office bomb with the attached lead made for a grim outlook on a Deadpool movie. Not to be  discouraged, director Tim Miller went out on his own and shot an epic short sizzle reel of an action scene featuring Deadpool as a proof of concept. The footage was remarkable. After it (accidentally?) leaked on internet, the reception was overwhelmingly enthusiastic. Fans took notice, the studio took notice, and here we are with a Deadpool movie. From the very first shot of the movie,we see that this isn’t going to be your typical comic book superhero flick. The credits sequence is executed in hilarious fashion (which I won’t spoil here) that captures the irreverent nature of a film that doesn’t take itself, or the superhero genre itself, too seriously. Ryan Reynolds, as Wade Wilson/Deadpool, shines in a role was clearly born to play, which is likely why he’s stayed attached to this project over the years despite its roller coaster of iterations. Think of the character this way: if you were to take Van Wilder and put him in tights, then you basically have Deadpool. Director Tim Miller is a relative newcomer to the scene, so to tackle a relatively big-budget action film like this on his first studio feature must have been intimidating, but Miller handles the action, comedy, and drama equally well. Some of the action and story beats are familiar, but they’re executed in a competent way that encourages viewers to give a pass to something they’ve probably seen many times over. The supporting cast in the film is a mixed bag. Monica Baccarin is captivating as a damsel in distress that for once, is on the same level as our hero. T.J. Miller delivers his style of comedy, and for some reason it seems to work much better here than it did in the last Transformers movie. British rapper-turned-actor Ed Skrein is surprisingly adept and convincing as the sociopathic mutant/scientist that kicks the plot into gear. Other actors, such as MMA fighter-turned-actress Gina Carano and ‘brooding teen’ Brianna Hildebrand are decent, but their inexperience in front of the camera shows, and at times they seem uncomfortable.

The conventions that set Deadpool apart from other superhero movies are the language (dude curses A LOT) and the narrative technique of breaking the fourth wall, specifically when Deadpool turns to address the camera, and in turn, his audience. The profanities definitely assist in the film’s comedic moments, but they also add gravitas to some of the more dramatic scenes. For instance, dropping F bombs while pacing the room seems like a realistic reaction to a stressful situation, and it works here. The fourth wall convention also works mainly because it opens the film up for self-referential analysis. For example, there’s a line about the lack of other X-Men in the film being due to budgetary constraints, and Reynolds (as Deadpool) suggests that Ryan Reynolds the actor couldn’t possibly be famous just for his acting chops. Moments like these are fun, especially in a genre film like this where there are so many tropes to poke fun at. 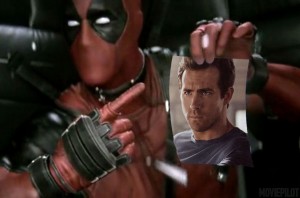 For all it does to distinguish itself, Deadpool cannot completely hide the fact that is still a superhero movie, more specifically, a superhero origin story, and that alone leaves little room for a unique moviegoing experience. It may be a somewhat fresh take, but not quite as fresh as something like last year’s excellent Kingsman: The Secret Service, which was a graphic novel adaptation that felt entirely original. As much as I enjoyed Deadpool, it did feel very familiar, and I can’t help but wonder if and when superhero fatigue will start setting in with moviegoers. However, if the box office success of Deadpool is any indication, it won’t be anytime soon. And to be perfectly honest, I’m personally already looking forward to a sequel.