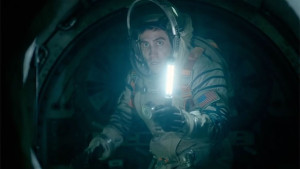 For All Its Efforts, Life Is More Derivative Than Homage To Certain Sci-Fi Classics

No, that intro was not intended as a philosophical explanation of the absence of extra-terrestrials. I’m talking about a movie here, people, more specifically the new sci-fi film starring Ryan Reynolds, Jake Gyllenhaal, and Rebecca Ferguson. I’ll be honest here, and mention that this movie wasn’t really even on my radar until just before its release, so at first had no preconceived notions or biases going in. All I knew was that the film had managed some heat out of the gate, and the critical consensus was that it was successful as a throwback to some of its sci-fi survival horror forefathers, such as Alien and its sequels. Being that I love these these films, my excitement dial turned the needle into the red. A successfull Alien throwback with a cast of esteemed actors? Yes, please! After seeing the film, my initial reactions to this classifications were that yes, Life is indeed heavily influenced by some of the most esteemed classics of the genre, but no, it was not successful. At all.

Maybe it’s just that I have a hard time getting excited about any film that is so obviously a retread, but I don’t think I’m out of line when I say that Life does not reinvent the wheel. It’s chock full of the types of tropes you would come to expect in your standard horror movie: characters get picked off one by one? Check. Important character undergoes a transformation and has to be put down by his friends? Check. Close, confined setting with few options to hide, and nowhere to escape? Check. It’s all here in all its derivative glory. Don’t get me wrong, I’m not going as far as to say that Life is an outright bad movie, but based on the positivity of initial reviews, I guess I was expecting some fresh element to provide a unique angle on the horror genre. The creature design is one of the film’s few strengths.

Despite this shortcoming, there are things Life does get right. For instance, the suspense is dialed up to 11, and moments of rest are few and far between. The claustrophobic environment is well-realized, and the set design does a remarkable job to convey the horror of tight, cramped spaces. The performances are adequate, but with such a stellar cast this almost seems a given, and it’s almost a disappointment in itself that the cast did nothing to go above and beyond in terms of character choices and development. Reynolds is in fine over-the-top form, which is great for surface-level entertainment, but little else. Gyllenhaal is a bit more understated, but again, I found little emotional resonance to his character. As for poor Rebecca Ferguson, she’s a genuinely talented actress, but she is given absolutely nothing to do here, and she comes across seeming bored. The creature design was interesting, and certainly based on an intriguing concept, but I couldn’t help but feel like I was watching someone play Dead Space on Playstation 3.

Rebecca Ferguson: “Give me something to work with here, people!”

If there’s a running theme in my reaction to this film, it’s that I expected more out of Life. I was genuinely disappointed that this was all Life had to offer. With the flash of hype that followed the initial release of this movie, I was hoping to be pleasantly surprised. However, I now realize that there was probably a reason I hadn’t heard more about this movie prior to its release. At its best, Life is a harmless guilty pleasure for those who crave standard generic horror fare. At its worst, Life is a blatant and bland ripoff of Alien and Gravity. Personally, I was disappointed, but perhaps if you go in with lower expectations, you may have a good time regardless.