Deftones are no strangers to adversity. Always teetering on that dangerous edge of mainstream acceptance and artsy self-indulgence, this is a band whose entire career has been defined by conflict. Of course they’ve had to overcome the coma and eventual death of original bassist Chi Cheng, but they’ve also been known to let the internal struggles between band members seep into the final product heard on the albums. And this isn’t always a bad thing. Their breakout album, 2000’s White Pony, was said to have almost destroyed the band, and it turned out to be their biggest critical and commercial success to date. Subsequent albums have for various reasons fell somewhat short of the promise shown on White Pony, however, and this may be due to the members of the band failing to turn their individual inspirations and styles into something cohesive. Many of the songs on these albums seem to lack unity. On Gore, however, all the various elements seem to coalesce in a way that is not always fantastic, but at least cooperative and concerted. Add to that a handful of truly transcendent musical moments, and you have one of the most listenable Deftones albums in years.

That’s not to say that the music on Gore is basic or conventional. There’s plenty of odd-time signatures, math-rock wizardry, and harmonic dissonance. Depending on tastes, this can be a positive or a negative. For some, the music warrants a study on the attention to detail necessary to compose such intricately elaborate parts. For others, it may be frustrating to come so close to establishing a groove, only to abandon the theme and move on to something unexpected. As with most other Deftones albums, the music often walks the line between beautifully ethereal and downright heavy, and this approach can be clearly heard in such tracks as Hearts/Lines, Geometric Headress, and the opener, Prayers/Triangles. Chino Moreno’s vocal performance is perfectly suited to these dynamic song structures, as he ranges from breathy ambience to manic screaming. The album’s production, especially where the vocals are concerned, nail this dichotomy to perfection. But the standout track on the album has to be the penultimate number, Phantom Bride, which enlists the help of Alice In Chains chairman Jerry Cantrell. This track is a demonstration of what Deftones do best: interesting guitar parts, an accessible melodic chorus, and a raging outro that comes from out of nowhere to knock you straight on your ass. 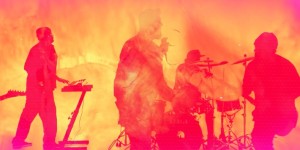 A still from the Prayers/Triangles video.

Deftones fans should go pick up Gore right away. But who am I kidding, based on the album’s bow at #2 on the Billboard charts, it appears they’re already doing so. If you loved White Pony, but have since become less interested in what Deftones have been putting out, I urge you to give this album a chance. Although it exhibits much of the classic Deftones tradition of avoiding cadence or tonal resolution at all cost, it is still one of the more accessible releases put out by the band. I found myself enjoying it much more on the second listen, and I suspect I will continue to find more delightful surprises on repeated listenings. That right there is a sign that the music is essentially deeper than what I’m used to. Go give it a listen or two (or three) and tell me what you think.