Captain America: Civil War Is The Best Avengers Film Without The Word ‘Avengers’ In The Title

Like most of humanity, I’d been looking forward to the latest chapter in the ever-expanding ongoing Marvel cinematic saga, Captain America: Civil War, with much anticipation. In fact, I had been ready for it ever since seeing the previous Captain America film, 2014’s excellent The Winter Soldier. That film was a proof of concept that a studio could take a film genre (the “comic book movie”), build a universe out of it, and then release various different ‘subgenre’ entries within that universe. For all intents and purposes, The Winter Soldier was more an espionage thriller than a flat out superhero movie, and I was cool with that. The film was excellently directed by the sibling duo of Anthony and Joe Russo, who at the time had the Owen Wilson comedy You, Me, and Dupree as their biggest hit. And while The Winter Soldier was technically a Captain America solo film, it also featured other Avengers such as Scarlett Johansson’s Black Widow and Anthony Mackie’s Falcon. The film worked wonders both on it’s own and as a Marvel shared universe movie. A worldwide gross of over $700 million and glowing critical reviews were proof.

As with any Marvel movie, Captain America: Civil War is a huge event film, but this one feels much more like an Avengers team-up than a standalone Captain America movie. Aside from Thor and The Hulk, pretty much every Avenger in the Marvel cinematic universe is accounted for here. Besides Cap, we also have Iron Man, Black Widow, Falcon, Ant-Man, Hawkeye, Black Panther, War Machine, Vision, Scarlet Witch, The Winter Soldier, Agent 13, and even Spider-Man. Yes, Spider-Man is in this movie, and it’s kind of a big deal. For those who didn’t know, the Spider-Man property is owned by Sony, not Marvel/Disney. But after the box office disappointment of The Amazing Spider-Man 2, Sony decided to cut a deal with Marvel Studios to get Spidey into the Marvel universe. I was a little nervous about the eventual casting of a relative unknown, and a young one at that, to fill Spider-Man’s underoos, but those fears turned out to be unwarranted because Tom Holland nailed it in this movie, and is a bona fide scene stealer in a film with hordes of first-billing stars. Other than Spider-Man, each of the characters in this film are somehow all able to get their own moments. Hats off to screenwriters Christopher Markus and Stephen McFeely for crafting a story where every character seems necessary and gets their own time to shine. In a movie flooded with superheros, this is no small task.

Last one to their trailer has to tear down the green screen!

The actual plot of the movie is practically identical to Batman V. Superman, but with more people in it. After looking into the collateral damage caused by the Avengers as a result of their heroic exploits, the question is raised whether having these guys around is causing more harm than good. A behind-the-scenes type villain shows up to sow the seeds of doubt among the heroes, which causes them to turn on each other and face off in an epic battle. You almost have to wonder if Marvel chose to do this story so closely following Batman V. Superman on purpose, as if to say, “Hey guys, this is how you really do it”. I would have to say that the execution is much better here. Part of that is that the Russo brothers (who have returned to the directors chairs for Civil War) are a fantastic directing duo, and I was surprised how much more I enjoyed the action here than in BvS. But Marvel has paid much attention towards giving each superhero their own unique characterization, and what results is a little bit of something for everyone.

Chris Evans and Robert Downey Jr. are both exceptional as headstrong leaders with a splash of humor thrown in, and to watch their ideologies clash is what is most rewarding about this film. Tony Stark (Iron Man) agrees that the Avengers might need some reining in, but Steve Rogers (Cap) is uneasy about putting their trust in government supervision. The rest of the Avengers fall in line on one side or the other, but care is taken to make sure that each of them have their own personal motivations for choosing their respective side. The villain of the piece, Zemo (Daniel Bruhl) is your typical undercooked Marvel baddie, but Bruhl’s acting chops go a long way towards keeping his character interesting. Newcomer Chadwick Boseman plays Black Panther, and instantly shows that he was a solid casting choice. Boseman makes an exceptional Black Panther, and after seeing him in this I’m that much more excited for his upcoming solo film. Paul Rudd as Ant-Man kills it as usual, and his comic relief is part of what keeps this whole thing together. Speaking of comic relief, watching Vision try to “fit in” by donning clothes straight out of an Old Navy commercial is hilarious. There really isn’t a weak link in the group, and again, props to the Russo bros for spreading the love around the cast. 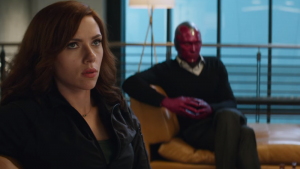 Whether it’s the talent of the directors and writers, or just the reliance on the brilliance of seasoned veterans Evans and Downey Jr., Captain America: Civil War shows that the Cap’n is still a top property within the Marvel franchise. The box office numbers show that the public agrees, and the critical response shows that most reviewers agree as well. I certainly do. Coming up next from the Marvel studio is another newcomer: Doctor Strange. Benedict Cumberbatch tries on a cape and an American accent in what is sure to be another entertaining installment of superhero mania. As long as Marvel can continue to differentiate between the myriad characters in its pantheon by giving them distinguishing characteristics and points of view, and as long as the films can continue to be executed in fun and interesting ways, hey, I’ll keep watching.