There seems to come a time in every metal band’s career where that inevitable crossroads comes clearly into focus: to go mainstream or not to go mainstream? That was certainly the question on the minds of Mastodon as they entered the studio to record the follow-up to 2014’s Once More ‘Round The Sun. While that album was definitive proof that the band’s sound was evolving ever further from the hardcore purity of their earlier efforts, there was a good dose of the inevitable fan backlash at play. It seems ever common these days that the heavier bands find themselves facing this issue. Maybe they get weary of writing in the same style for so long. Maybe they feel they’ve earned the right to go for a larger share of the music buying market. Maybe they just get bored and want to try something new. Some of these bands decide to go for it and do just that, while others opt to keep to the formula that made them successful in the first place. Some even just decide to call it a day and break up. So how would Mastodon, a band who has made a career by living on the far side of normal, respond when standing in the center of the X that is the metal crossroads conundrum?

They went for it. Despite the imagery on the album cover, Emperor Of Sand is an unquestionable shot at mainstream metal. And damn, does it hit the mark. By now all us Mastodon fans know that this is a band of technical wizardry, both in musicianship and songwriting. But it’s pretty clear from this album that it doesn’t take 15 time signature changes a song to write and perform compelling, complex music that’s actually catchy. And this album contains by far the catchiest music the band has ever written. The first video off the album, “Show Yourself” (which is hilarious, by the way), is a far cry from anything off of Leviathan or Blood Mountain, but it’s still surprisingly awesome in its own right. The band seems to have taken a cue from some of the other metal acts that have embraced the fringe of the mainstream by bringing heavy riffing into more traditional song structures, bands like Baroness, or even CKY. It’s no easy feat to maintain your heaviness while veering into sing-songy choruses that stick in your head after the song is over. Songs like “Steambreather”, “Roots Remain”, and “Ancient Kingdoms” pull this off masterfully. 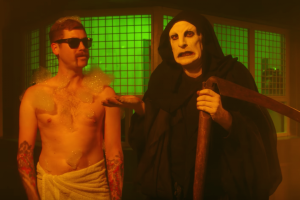 The music video for “Show Yourself” is an instant classic.

Over the years, Mastodon has expanded the vocal duties of the band. Initially, bassist Troy Sanders handled the heavy lifting, but over time, guitarist Brent Hinds has emerged as a strong counterpoint to Sanders, and the switching off of lead vocal duties, often within the same song, has become one of the band’s greatest assets. Drummer Brann Dailor has even jumped into the mix, and how he is able to do so while throwing down incredibly complex drum parts is beyond me. This all-hands-on-deck approach to the vocals really does elevate Emperor Of Sand to an entirely new level. You have Sanders laying down a brutal verse section, paving the way for Hinds to come in with an Ozzy-like chorus section, complete with some backups by Dailor, and the result is actually quite glorious. I can’t leave guitarist Bill Kelliher without love here, because his (and Hinds’) guitar work is as insane as ever. These dudes straight up rip. And the fact that they can bring such interesting and complex riffs into a more mainstream songwriting approach is damn impressive. Speaking of impressive, Dailor’s drumming is out of control, and in the best way. This guy can go from ridiculously busy part to ridiculously busy part, and it all sounds seamless, and in no way takes away from the overall song. Props.

I think that the more traditional fans of metal in general are really going to like Emperor Of Sand. It’s a solid, heavy record that manages to get that Mastodon sound across without having to alienate the more casual listener, as has sort of been the band’s MO in the past. No doubt there will be longtime fans jumping off the bandwagon and looking for some new, more obscure sound to latch onto. When Metallica released the Black Album in 1991, many of their fans turned their noses up in disgust and abandoned ship, but despite being commercial, that album is a damn good album. Similarly, Mastodon does not deserve to be chastised for changing it up a little bit, as long as the end result is still interesting and hits the right notes with you. For that reason, I fully endorse Emperor Of Sand as one of the band’s shining moments. Give it a listen and see if you agree.

One thought on “Music Review: Mastodon – Emperor Of Sand”