No one assumed this was gonna be easy. SoCal punk vets Blink-182 were faced with one hell of an uphill battle when they made the decision to put out the “comeback album”, California. Let me list off some of the many challenges they faced in their return: One, founding member and fan favorite Tom Delonge had left the band in an antagonistic and very public fashion. Two, new member Matt Skiba, co-frontman for Alkaline Trio, and not a household name by any means, has slightly differing musical sensibilities when placed next to Blink’s body of work. Three, the band’s full-length effort, 2011’s Neighborhoods, was a soundtrack of a band in decline, and it naturally set the stage for the conflict that was to follow. Four, and perhaps most importantly, popular tastes in music are just different now. Fun and silly pop-punk has been replaced by self-important hipster core, which is drastically quieter and much more reserved in comparison to the foundation Blink-182’s successful career has been built upon. So with that many strikes against it before the first power chord is even played, there’s basically no way Blink-182’s new album, California, can be any good. Right?

Wrong. So, so wrong. California, against all odds, is a simply phenomenal record. Listening to these songs is like a breath of fresh air. The melodies are catchy. The production is solid, if a bit overbearing. The songs are punk rock, and very, very fun. Yes, California shows the current generation that sometimes it’s ok to embrace your inner bratty 12 year old and focus on what’s fun in life. The album’s opener, “Cynical”, sets this tone masterfully by transitioning from a mellow, shoegazer-type intro into a throwback, double-time burner that makes me wish for a crowd to jump into and surf. Up next is the album’s first single, “Bored To Death”. Upon first hearing this song, I was initially not encouraged by the song’s intro, a rehash of other classic Blink moments, but by the time the song’s epic chorus kicked in, I seized upon two things. First, this song is a straight up hit in every sense of the word, and second, Matt Skiba fits into Tom’s slot WAY better than I could ever have imagined. Yes, I may be a little biased, being a big fan of Alkaline Trio, but the proof is in the pudding. His voice and guitar work, melded with Mark Hoppus’ bass and vox, is like chocolate and peanut butter. These tastes together are nothing short of delicious. Add Travis Barker’s always impressive drumming and producer John Feldmann’s production wizardry, and what you’ve got is a recipe for something truly special. I mean it, these guys all nailed it. 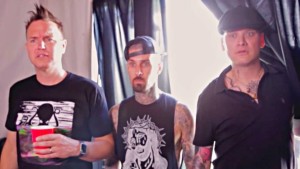 I realize, of course, that there are some Tom fans out there who are going to be disappointed at the line-up change, but I urge those of you to at least give this album a listen before passing judgement. Songs like “Los Angeles”, “No Future”, and “Home Is Such A Lonely Place” demonstrate how the band’s new direction seems to be taking steps forward in terms of song craftsmanship while also looking backward to the fun punk rock attitude that the band was formed with. Speaking of fun, when the song “Kings Of The Weekend” kicks into the uptempo chorus accompanied by the lyrics “Thank God for punk rock bands”, it’s a welcome reminder that the current state of popular musical tastes doesn’t mean there isn’t any room left for fun, kick ass, fast music. Sure, we all get older and with age usually comes maturity. But that doesn’t mean that us “mature people” can’t still enjoy some punk rock songs about naked dudes in pools from time to time. I’ve found I’ve been able to listen to California on repeat without tiring of the material, and for me, that’s an excellent sign. I’ll go on record and say that Blink-182’s triumphant return has been the surprise hit of the summer, and possibly the year, for me. So go give it a listen and channel your inner bratty punk rock kid.