Despite Its Best Intentions, Ghostbusters Is Ultimately A Missed Opportunity

Unlike a large and very vocal percentage of the moviegoing population, I was rooting for Ghostbusters, the Paul Feig-directed reboot of the 1984 action/comedy classic, to succeed. This project had been exiled to development hell for a seemingly indefinite amount of time, so much so that every time I heard a new rumor of the Ghostbusters remake gaining traction, I defaulted to my “yeah right, not in this lifetime” conditioned response. So when Sony made the announcement that not only was Ghostbusters for sure happening this time, but that it would also feature a gender-swapped cast and director Paul Feig, who lists Bridesmaids and Spy among his credits, set to direct, I mentally switched from a “yeah right” to a “right on”. By now most everyone knows the story of what happened next: I’m talking unprecedented backlash here, kids. And trust me, I do understand why we suddenly had so many people crapping all over an idea before actually having a chance to experience even the slightest inkling of it. It’s reboot/remake exhaustion, and compound that with a risky casting choice, and you have to know you’re leaving an opening for criticism right out of the gates. I’m getting a little weary of the remake cycle myself, and there are plenty more instances of this trend going wrong (Terminator: Genisys) than going right (Jurassic World). Yet this isn’t the biggest reason for the backlash, I know. Every internet troll and their mother was crying foul and sacrilege over the femalization (new word I made up) of their beloved characters. In this new universe, Dan Akroyd is now Kristin Wiig, and Bill Murray is suddenly Melissa McCarthy. Harold Ramis has been replaced by Kate McKinnon, and the token Ernie Hudson is now the token Leslie Jones. While this recasting “gimmick” has rubbed a huge number of people the wrong way, I was actually on board with the idea. I mean, why not? There’s no reason why a talented group of female actresses can’t step into the big boy shoes and create something that has all these trolls gobbling their hats, right? Well, after seeing Ghostbusters, I have one thing I’d like to say to all those sexist haters out there spreading all their poisonous bad vibes into comment boards across the webisphere…

You were right. There, I said it. As much as I hate to admit that Ghostbusters is ultimately a sad failure, I have to, because it is. I can’t say this is the film to prove once and for all that women can dominate the box office just like men can, because it isn’t. I’m not saying these things aren’t possible, just that Ghostbusters is unfortunately not the film to change things. And let me be clear, a change would be welcome. In my mind, gender equality is something that should be a given, and hopefully both women (and minorities) will be given the same opportunities as the white dudes, and this is real talk coming from yes, a white dude. It just kinda sucks that Ghostbusters, which had a chance to do something really special, instead just kinda sucks. It’s not that funny. It’s not that original of a take on the mythology. It seems like it’s trying too hard. But perhaps the movie’s biggest failure is that it’s female leads, which are for better or worse operating under a virtual microscope here, just aren’t that compelling. 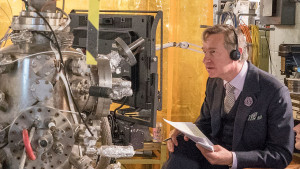 It wouldn’t be fair to place the blame solely on the actresses. We’ve seen both Kristin Wiig and Melissa McCarthy shine in other vehicles, so we know that they are at the very least competent in their own respective right. However in this film, their characters are bland. They’re given a backstory with the potential for some juicy confrontation, but the conflict between them is completely over and done with before we even get to the film’s second act. I really like Kate McKinnon as a comedian/actress, and I was hoping that Ghostbusters would be a launching pad for a promising film career, but unfortunately the script really doesn’t give her much to do, so she’s left to her own scenery chewing devices. This gives the impression that she’s trying too hard. As for Jones, her large and loudmouthed stereotypical character is regrettably forgettable, and does nothing in the way of forwarding roles for women of color. And I swear this isn’t just the man in me saying this, but I have to be honest and say it. The most compelling character in the female version of Ghostbusters is not a female. Chris Hemsworth, as the hunky but hopelessly stupid secretary Kevin, is hilariously brilliant, and a bright spot in this otherwise dull product. 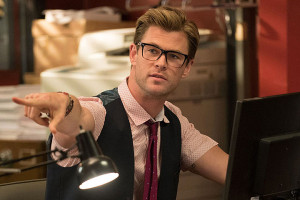 I may come across as being a little hard on Ghostbusters, but because I wanted it to succeed so much, it makes it all the more disappointing that it really didn’t. It is by no means a terrible film. The VFX are actually pretty legit. The ghosts are fun for the most part, although the appearance of Slimer and his Slimette girlfriend is admittedly lame. It’s a damn shame that Ghostbusters turned out less than equal to the sum of its parts, but that doesn’t mean all hope is lost for female-driven action movies. We’ve just gotten our first glimpse at the Wonder Woman standalone film, and it looks pretty great. Captain Marvel is also confirmed to be on the horizon, and with Oscar winner Brie Larson in the role, the outlook is good. Fans of the Ghostbusters saga should still go check this out, either to enjoy revisiting the world or to add fuel to the fires of your discontent.