Free State Of Jones Is An Engaging, Albeit Problematic, Glorification Of A Civil War Hero

The War Film, like war itself, has become something of an American tradition. Whether the film’s focus is on the war itself, or is merely a story set against the background of war, we as filmgoers have become acclimated to a cinematic experience occurring on and around the battlefield. Interestingly enough, for all the score of WWII films that have been released over the years, there has been surprisingly little attention paid to an extremely important event in our country’s history: The Civil War (not talking about Marvel and Cap, by the way). It’s no secret to anyone who’s been paying attention that even when Civil War films are released, the overwhelming majority of them tend to view the event through the dusty lens of either the northern soldiers or southern slaves. Rarely do we witness the perspective of the confederate military, a group that while fundamentally misguided in cause, is nonetheless ripe for compelling story material. This southern perspective is front and center in Free State Of Jones, a true story adaptation centered on the life of Newton Knight, a confederate deserter who rose up against his superiors in defense of the exploited, poverty-stricken civilians of both black and white races. 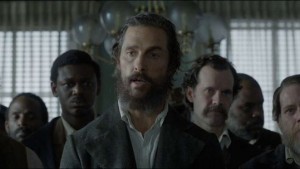 All rally behind the white Knight!

The central character of Knight is played by Academy Award winner Matthew McConaughy, and to his credit, he disappears into the role. In some of McConaughy’s earlier works, he tended to play a version of himself, so much so that I half expected to him to bust out with an “Alright, alright , alright…” in practically every role. Clearly, that trend has reversed. Recent McConaughy performances have been more defined by an exhibition of various character traits, whether they be positive ones or negative ones. McConaughy’s Knight is an archetypal hero in Free State Of Jones, but he is by no means a perfect character. Neither are the peripheral characters that surround him, although they are equally compelling. House Of Cards‘ Mahershala Ali is a key standout among the supporting players with his portrayal of Moses, a refugee slave who finds his own set of obstacles in Knight’s camp of followers. There is however, a troubling dynamic between the roles of Knight and the slaves that feels like at the very least a missed opportunity. And that is the film’s presentation of Knight as the savior, the literal “White Knight” who turns out to be the only one capable of making change in these harsh and unfair times. All of the other characters that Knight feels bound to protect, while acted capably by their respective actors, tend to be of the one-note “damsels in distress” trope, incapable of taking their destiny into their own hands. They choose to let Knight do all the hero-ing for them, without an attempt to forge their own way. Perhaps this is historically accurate, perhaps not. In either case, this dynamic takes away from what could be a much more engaging narrative. 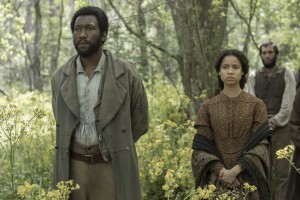 Mahershala Ali and Gugu Mbatha-Raw play solid characters, even they’re mainly there to be saved.

Speaking of narrative, the story in Free State Of Jones is just as muddy as the swamps the main characters inhabit while hiding from the confederate army. The film attempts to shoehorn in a plethora of story material, some of which isn’t necessarily essential to the main plot. There were several times towards the end of the second act where I found myself glancing at my watch. Added to this is a curious flash-forward device that jarringly uproots the viewer and places them in the middle of a 20th century court case concerning the racial status of one of Knight’s descendants. This appears to be an attempt to show the historical relevance of Knight’s actions, even though the result isn’t exactly a happy ending. However, the placement of these scenes at seemingly random moments took me out of the main story and seemed overly tangential. I kept thinking that this device could have much much more effective as a bookend, by enclosing the main story within an intro and outro that allowed the main story action to solve the case at the end. I suspect that it was more important for the filmmakers to open on what was admittedly a captivating spectacle of the horror and sheer brutality of the war in action. This opening sequence was disturbing, and gory as hell, but it helped to immediately set the stage for the story by putting it into perspective. 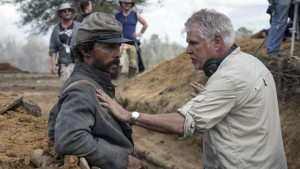 Overall, Free State Of Jones is a mild disappointment, but is nonetheless entirely worth watching. Director Gary Ross (The Hunger Games, Seabiscuit) has a knack for putting the viewer right in the middle of the situation, and that opening battle sequence is perhaps the best example in this film. I’m aware that many critics have been a bit harsh on this movie, but I have my suspicions that most of that is based on the “White Knight” syndrome of the film’s protagonist not falling in line with these critic’s personal agendas. And that’s fine. They honestly have a point, and I was perhaps a bit negatively affected myself. But none of this should keep you from either going out to see this film, or catching it on DVD when it becomes available. This goes double if you’re like me and have been jonesing for a good historical war flick not centered on WWII. The film may have it’s faults, but is still a worthwhile endeavor. Alright, alright, alright.