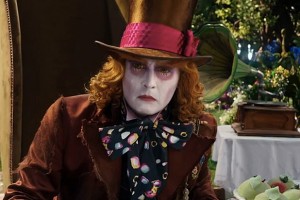 Ok, I get it. There is a ton of hate floating around on the interwebs for Disney’s Alice Through The Looking Glass, the late-to-the-tea-party follow up to 2010’s Alice In Wonderland. And I get where a lot of this animosity is coming from. Even before the allegations of domestic abuse toward Johnny Depp came out, before his wife filed for divorce because of his erratic, alcoholic behavior, audiences have grown tired of the Depp-shtick. There was a time, not too far back, when Depp would create a quirky, zany character and it would work. I’m not alone when I say that Jack Sparrow from the Pirates Of The Caribbean franchise is one of the all time classic anti-heroes. However, the Depp-shtick has its limits with an audience, and once fatigue from all these similar characters began to set in, it started to get really annoying. For me, this backlash reached a zenith with the (rebooted) original Alice film, directed by Tim Burton. Burton and Depp have had a longstanding working relationship, and many of the films the two have collaborated on have been outstanding (Edward Scissorhands, Sweeney Todd, Ed Wood). However, when Depp took a far-too-over-the-top approach to creating his moronic Mad Matter character, things got lame. To this day, I’m still not sure what mentally went into those character choices. A lisp is strange enough, but when it suddenly transforms into a Scottish brogue for no good reason is head scratching. Depp aside, the first film made boatloads of money, and it had some unique technical achievements that helped make a primarily green-screen environment feel fun and immersive. 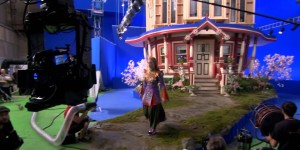 Mia Wasikowska does a decent job selling the virtual environments.

With Alice Through The Looking Glass, Burton is gone from the director’s chair, having been replaced by James Bobin, best known for directing 2011’s The Muppets. Burton is known for his ability to create stylized fantasy worlds, so in many ways he was tailor made for this property. Bobin’s film may lack some of the previous film’s imagination, but he actually does a decent job with continuing the story in way that feels fresh. For those familiar with Lewis Carrol’s novels, Through The Looking Glass has even less in common with the book than its predecessor, so purists be warned. Many of the returning characters from the first film are back, and while some are central to the story, a lot of them feel like they’re only there as fan service. The March Hare, the Caterpillar (now a butterfly), the Cheshire Cat, and the Tweedles Dee and Dum serve practically no purpose here. Yet, other returning characters are much more welcome. Mia Wasikowska is highly watchable, even though she doesn’t have much to do here, Helena Bonham Carter’s Red Queen is just as vibrant here as she was in the first film, and Leo Bill is once again a scene stealer as the stuffy Hamish. Newcomer Sascha Baron Cohen plays the personification of Time, and while he also takes the Depp approach of making a character out of an odd voice, he seems to do it so much better than Depp does, even if his characterization has its own flaws. Helena Bonham Carter as the Red Queen, and Sascha Baron Cohen as Time

All this being said, Alice Through The Looking Glass is not as bad a film as most of the critics might have you believe. The story, although highly fantastical, is coherent. The set pieces are fun and unique, even if they give off a strong video game vibe at times. The message of the film is a loosely veiled appeal to look at the notion of time in a positive, rather than negative light. Time is a gift, not a thief. This theme is what the story is really about, and the film conveys its message without having to beat you over the head with it. Yes, Depp’s Mad Hatter is bad. Really bad. Downright awful almost to the point of being unwatchable. But if you can get past the scenes that he dominates, this is actually an enjoyable film. It’s far from perfect, sure, but unlike other critics I wouldn’t advise people to steer clear. If you saw the trailers for this film, and it looked like something you’d enjoy, then by all means go check it out. It may not be the summer blockbuster you’ve been hoping for, but you might be surprised to find yourself having as a good time in the theater as I did.