What Disney’s Live Action Beauty And The Beast Lacks In Originality, It Makes Up In Spectacle

It was 1937 when Walt Disney released the first ever feature length animated film, Snow White And The Seven Dwarfs. Banking the entire financial fate of the company on this single film ultimately paid off, and Disney has dominated the animation market ever since. Disney’s traditional formula of reimagining literary classics for contemporary audiences, as seen in such films as Pinocchio, Alice In Wonderland, Robin Hood, etc. has been a cash cow for the studio throughout the 20th century, but as technology evolved, so has the Disney model. A partnership with CGI juggernaut Pixar at the turn of the century has shifted the focus away from the more traditional hand drawn animated films to the spectacle of digital animation. A strong focus on compelling original stories to complement the ever-evolving visual elements has produced a number of outright masterpieces (Toy Story, Up Wall-e, Finding Nemo, etc.). Never ones to be idle, Disney decided to branch out and start producing their own original animated films alongside their Pixar counterparts, and the result was yet more success (Frozen, Zootopia, etc.)

Over the last few years, we’ve seen the latest trend from the studio, which is the adaptation of their own animated classics into live-action versions, a reimagining of the reimaginings, if you will. Some of the earliest of these iterations, Alice In Wonderland, The Jungle Book,and Cinderella, were modest to massive successes. It was a gamble, but it paid of. The latest in the trend is based on the animated version of Beauty And The Beast, which came out in 1991. It was the first Disney animated film to earn an Academy Award Best Picture nomination. It may not have won the Oscar, but it did net a boatload at the box office. It seemed inevitable that this classic would be one of the early ones to be given the live action treatment. And the result has been box office madness, along with a generally positive critical reaction.

The production design in Beauty And The Beast is the real star of the show.

More than anything else, Beauty And The Beast is a feast for the senses. The production design is the real star of this movie, as every frame is impeccably composed, lit, and rendered. Props must be given to the entire design crew, particularly production designer Sarah Greenwood, costume designer Jacqueline Durran, and set decorator Katie Spencer. The digital and practical environments are seamless, and it’s hard not to be completely drawn in to this fictional region of France where everyone seems to speak English for some reason. I wonder if there’s a human being on Earth who doesn’t find Emma Watson’s Belle likeable.

The casting choices in this film are inspired and particularly effective. Emma Watson is starting to cement her status as international sweetheart with her portrayal of Belle, which is the perfect recipe of innocence, sass, and charm. Her singing isn’t mind blowing, but her voice fits the character of a seemingly ordinary girl with rich, hidden depth. Dan Stevens plays the Beast, and although we rarely see him out of CGI makeup, he hits all the right notes. The main villain of the piece, Gaston, is played by Luke Evans, and his scenery chewing take on the character is kind of fantastic. I’ve always thought Evans was an underrated actor, but I can’t imagine his talents will continue to fly under the radar much longer. Josh Gad brings the silliness, and an array of big name talents such as Ewan Mcgregor, Ian Mckellen, Emma Thompson, and Stanley Tucci, as the digitized characters, bring the heart.  Bill Condon, the director, is so ridiculously on point with his scene setups and performances that you will likely find it impossible to fathom this is the same guy who brought us Twilight: Breaking Dawn. 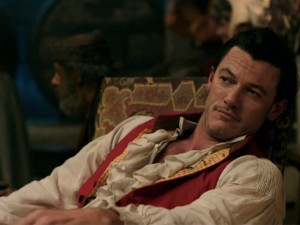 Luke Evans is kind of awesome in this movie.

If you’re a fan of the original animated version of Beauty And The Beast, or if you’re a closet Disneyphile (like me), I can’t imagine you’d leave the theater disappointed. This live action version of Beauty And The Beast is a finely crafted film. Admittedly, this is not the most original version of the familiar story, but where I would normally be bored by such a retread, that was certainly not the case here. With the success these live action Disney adaptations are enjoying, I can imagine we will be seeing plenty more of the classic stories find their way to the big screen. I’m cool with that. Except maybe not Song Of The South, because that would be awkward.

May 3, 2017
Movie Reviews Movies Reviews No comments jefffeuerhaken
← The Loud Feedback Podcast Ep. 13: Fate Of The Furious & Mastodon – Emperor Of Sand Coming Next Month – May →