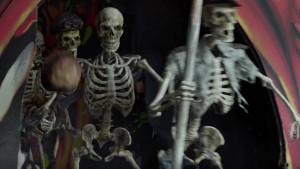 For What It May Lack In Substance, Miss Peregrine’s Home For Peculiar Children Makes Up For In Style

Disclaimer alert: I love Tim Burton. Always have. Since I was a young brat just discovering how much I loved and admired the process of making films, Tim Burton was always my biggest hero. I was a huge fan of Batman (the O.G. one, with Michael Keaton), but even more so I was enthralled with his Burton’s more offbeat projects like Edward Scissorhands, Beetlejuice,and Pee Wee’s Big Adventure. There exists a consistent visual style in Burton’s body of work that stems from the director’s unusual imagination. The worlds of his films never seem to occupy the same reality we live in, but instead present a seductive fantasy world for the viewer to dive into and escape the monotony of their own lives. For anyone paying close attention, it’s no secret that Tim Burton’s films tend to validate, and perhaps even glorify, the outsider. Those fish out of water archetypes such as Edward Scissorhands, Pee-Wee, and even Batman are weirdos, outcasts, loners, and are thus compelling, unique, interesting. I always found comfort in the message of these of films: being different is ok, and maybe even a strength, regardless of how others might perceive you. 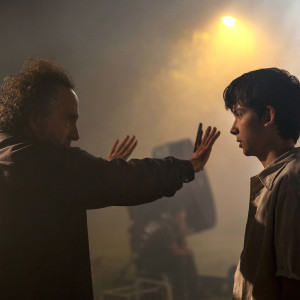 The subject matter seems tailor made for Tim Burton.

With these themes in mind, Miss Peregrine’s Home For Peculiar Children was a perfect fit for Burton to direct. The protagonist, Jake (Asa Butterfield), is a loner whose only confidant is his eccentric grandfather (Terence Stamp), who fills Jake’s head with wild stories about old friends with supernatural abilities. After Jake’s grandfather passes away under curious circumstances, a strange postcard sends Jake, along with his skeptical father, on a journey to a remote island, in hopes that Jake may find some closure to help him deal with his sorrow and alienation. Once he arrives, circumstances lead him to the very inhabitants of his grandfather’s stories, including their headmistress, the very peculiar Miss Peregrine (Eva Green). Here at the home for Peculiar Children, Jake learns that not only is he himself one of these “peculiars”, but he may also be their only hope at salvation from a mysterious, dark threat. Clearly, this material is right up Burton’s alley. For the most part, he delivers, but there are certain characteristics inherent in a quality film (cough, cough, character development, cough) that have always seemed a struggle for the visually masterful director. These same issues are at play in Miss Peregrine. The film is beautiful, visually compelling and imaginative, but the nuances of character and story development tend to get a little lost in the shuffle.

Eva Green is super underrated, and it’s a damn shame.

The acting performances are pretty legit, on the whole. Eva Green in particular, shows once again why she is one of the most underrated actresses in Hollywood. Every moment she’s onscreen commands utmost attention. In this role, she depicts what Mary Poppins would have been like if she grew up listening to Depeche Mode or The Cure. The result could have been weak sauce in the hands of a less capable actress, but Green is absolutely a high point in this cast. Butterfield is an interesting enough protagonist, Stamp is both haunted and likable, and Ella Purnell’s huge eyes are hard to look away from. On the other side of the spectrum, Chris O’Dowd has a hard time masking his accent, and Samuel L. Jackson is, well, quite Samuel L. Jackson-y (yes, you know exactly what I mean). The story, based on the best selling novel by Ransom Riggs, is whimsical and highly entertaining, and Jane Goldman’s adaptation is efficient and solid. The artistic vision is the true star of this film.

The real star here, as in most Tim Burton films, is the production design. The set pieces have plenty of variation, but all still feel part of the same film. World building has always been one of Burton’s greatest strengths, and the imagination of this world shines through brilliantly. Miss Peregrine is a kid’s movie at heart, but there is enough material to delight fans of any age, particularly if they are fans of the director. For those who aren’t Burton fans (of which I’m aware there are many, particularly in the critics circles), this film isn’t likely to change your mind about the director. It’s another case study in style over substance, but in this film, there is at least some degree of substance, and the visionary style more than makes up for these deficiencies.