Post-Hardcore Cult Heroes At The Drive In Attempt To Capture Lightning In A Bottle Twice With Inter Alia, Their First Album in 17 Years

For those that remember the terrifying event in our nation’s history infamously known as the Y2K crisis, you might recall that the threat of global technological shutdown (which of course never happened) may have had a soundtrack, and that soundtrack was the album Relationship Of Command by At The Drive In, released in 2000. I remember when I first heard “One Armed Scissor” and saw the music video back in those pseudo terrifying times, I was struck by how original and unique the band was. Their sound was aggressive, but in a way I hadn’t heard before. They also looked different than any band I had heard before. I mean some of these dudes had straight up afros, for chrissake. El Paso, TX’s At The Drive In was one of the seminal groups that forged the nigh-unclassifiable “post-hardcore” scene in the early 2000’s. The initial success of that first album, helped to some extent by the radio/videoplay of the single “One Armed Scissor”, gave the band an almost instantaneous passage to cult status. This was something new, something fresh and exciting, something people had been waiting for.

And then it was gone. On an early tour to promote Relationship Of Command, the band had a falling out, and apparently it was a heavy one, because it caused a break up. Almost as quickly as At The Drive In had blown up, they fell apart. One half of the band, singer Cedric Bixler-Zavala and guitarist Omar Rodriguez-Lopez, went on to form The Mars Volta, while the other half, guitarist Jim Ward, bassist Paul Hinojos, and drummer Tony Hajjar went on to form Sparta. While both bands produced worthwhile efforts, The Mars Volta had more or less experienced a higher level of success out of the two. The Mars Volta’s music seemed to exist on the same trajectory continuum that At The Drive In had originally occupied, but much further down the road, off the beaten path and dangerously close to the realm of the inaccessible. Neither Sparta nor The Mars Volta had ever seriously flirted with mainstream commercial success, but it seemed each camp was perfectly content to do their own thing, despite the lingering fan speculation of what could have been, if the original group had never made the decision to break up.

In 2012, that speculation was answered when At The Drive In decided to let bygones be bygones and reform. At least most of the band did. Original guitarist Jim Ward, now frontman in Sparta, was still over it. Apparently the blood was bad enough to keep him away, even more than a decade later. The reformed band played some shows, mainly festivals such as Lollapalooza and Coachella. Besides this handful of shows, there wasn’t much else to come out of this reunion, and it seemed more or less a disappointment. But when The Mars Volta broke up in 2013, the possibility of a full-blown At The Drive In comeback seemed all but inevitable. And now, that moment is here, in the form of a brand new album on Rise Records, titled Inter Alia. So with all the cult hype and anticipation bringing the pressure, does the album live up to its promise?

Well, kinda. Inter Alia is by all means a solid record. Those who were fearing the worst, that this band had lost its touch over the years, can rest easy. This album is by no means a failure. But it’s not really an unqualified success, either. It’s true that the music contains a lot of what made Relationship Of Command a hit in its time, and the album captures plenty of that similar energy. But somehow, by today’s standards, that whole sound feels somehow dated. The songs aren’t as memorable as I hoped for, and maybe the production is partly at fault here, but the album just doesn’t seem to pack the same punch as some of its earlier predecessors. As for the album’s strengths, Bixler-Zavala clearly has a very distinctive voice, and it unquestionably fits the music to perfection. The guitar work of Rodriguez-Lopez and Keeley Davis (Jim Ward’s replacement, who comes from Ward’s old band Sparta, of all places!) indulge in a very freestyle, stream of conciousness-type approach to playing. There’s no clear rhythm guitar in play here, but instead it’s like there are two lead guitar players, semi-meandering their way through the more rigid format of the songs, all while trying to avoid stepping on each other’s toes. When it all comes together, it’s like a controlled chaos, an untamed soundstorm serving as backrop to Bixler-Zavala’s cryptic lyrics. At it’s best, like in songs such as “Governed By Contagions” (which has a lyric video) and “Incurable Innocent” (which also has a lyric video), there is an overall structure and catchiness that elevates the final result. 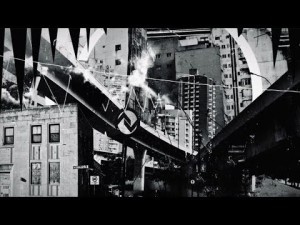 The video for “Governed By Contagions” is all artsy and stuff.

But at its worst, as in many of the other songs on the album, it’s unfortunately unremarkable and borderline meh. Maybe the sonic landscape has shifted too much during the interim, maybe some of the initial fire has lost some of its intensity, maybe you just can’t capture lightning in a bottle twice, but whatever it is, it keeps Inter Alia from rekindling the cult hero status ATDI once enjoyed. Again, I want to emphasize that this is not a bad album, by any means. There are some really good songs contained within, and any fan of the band will bask in the comfort of their return. Hell, maybe even see them live. But at the same time, when I really think about it, on some level Inter Alia is about what I expected. And for that reason, I can’t help but feel a little let down. Barely.

May 13, 2017
Music Music Reviews Reviews No comments admin
← Movie Review: The Fate Of The Furious Movie Review: Guardians Of The Galaxy Vol. 2 →