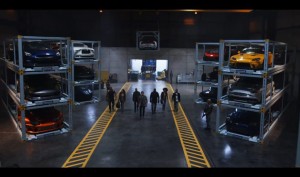 I’ll be the first to admit that I was late to hop on the Fast and Furious train. Actually, it wasn’t so much a hop as it was a drag. Like as in, being dragged aboard the bandwagon, kicking and screaming the whole way. When the first Fast and Furious film was released, 2001’s aptly titled The Fast And The Furious, there was a bit of a divide amongst the audience. On the one hand, you had the movie’s target audience, which we will call the “street racing enthusiasts”. This group was all in from the get go, because the first F&F had everything they wanted: hot chicks, tough, macho dudes, and fast cars. On the other side of that divide, you had those who were just eye-rolling at the silliness of it all (guess which camp I was in). The modest box office success of the original film was no masterpiece, but it did pave the way for a string of sequels. While these sequels continued to add new characters to inject fresh blood to the franchise, that didn’t necessarily mean the main cast was always present. In fact, for the third installment, Tokyo Drift, none of the cast were returning characters (okay fine, except for the cameo at the film’s closing).  Besides the revolving door of cast members, there was a certain formula at work here, which was basically as follows: Fast cars + hot chicks + action – plot – quality = $. The fans continued to eat it up while the eye rollers continued their eye rolling.

What happened next, no one could have predicted. When the fifth movie came out (Fast Five), there was a new element introduced to the franchise: self-awareness. Sure, it was more of the same high octane action we’d come to expect from a Fast and Furious movie, but this time around, it seemed like the filmmakers were having fun with the material, rather than taking it so seriously. Perhaps they wanted a piece of the eye-rolling demographic, or perhaps they just recognized how damn silly these movies were and just ultimately decided to embrace it. The action was more over the top than ever, and unapologetically so. It became clear that fun was the endgame. The result was a surprising heaping of critical praise. The next two films, numbers 6 and 7, pushed this concept even further, resulting in even higher critical acclaim and ridiculously higher box office draws. What had started out as a modest, cheesy exploitation film had somehow become a franchise juggernaut, and suddenly The Fast And The Furious was one of the biggest movie franchises in history.

Jason Statham is perfect for these movies.

I’m sure you can see where I’m going with this, in that it should come to no one’s surprise that Fast and Furious 8, titled The Fate Of The Furious, is all about sticking to the plan. When a franchise is raking in the dough like this one does, the last thing you want to do is mess with the formula. In short, we all knew what we were in for here. There’s plenty of insanely over the top action, a solid heaping of hot, scantily-clad ladies, the ever-present motif of family (pretty much bro-dom), and as always, a lineup of fast, sexy cars. This movie knows exactly what it is, and exactly what it wants to do. And you know what? It does it pretty damn well. This movie isn’t trying to win any best actor nominations (although Jason Statham is pretty rad), but what it focuses on, particularly the action sequences, is undeniable awesomeness. It seems that when the top action and stunt choreographers in Hollywood are looking to step up on the world’s biggest stage and show what they go, it is these Fast and Furious flicks that provide that perfect opportunity to just go nuts. And the action in The Fate Of The Furious does not disappoint. It’s straight up nuts.

Props must be given to director F. Gary Gray, who has come a long damn way since he directed Friday back in 1995. Gray hit it big last year with the massively successful N.W.A. biopic, Straight Outta Compton, which was a very different type of movie. In Fate Of The Furious, Gray shows that he’s got some action chops for days. One of the aspects of recent Fast and Furious movies that the franchise has been mindful of is bringing in fresh blood to the director’s chair and giving these guys a chance to shine. Justin Lin, James Wan, and now Gray were all unlikely star action directors before breaking their Fast and Furious cherries, but each of these guys have hit home runs when they stepped up to the directorial plate. As in other Fast and Furiouses, there’s roughly a 70/30 focus of action/plot. I’m sure that for some people, that may be a problem, but if the formula ain’t broke, why fix it?

The ever-growing and evolving cast of this franchise has been interesting to watch. Vin Diesel, one of the stars of the original 2001 film, is now a shot-calling producer. Chris ‘Ludacris’ Bridges and Tyrese Gibson have emerged as the primary sidekick characters, and in these roles, they’re fine. One of the biggest behind the scenes storylines in this franchise was the untimely death of star Paul Walker, and The Fate Of The Furious is the first FF film without him appearing onscreen. It’s abundantly clear that the producers felt they needed a new hunky white guy to step into his shoes, and Scott Eastwood (yes, Clint’s son) has been tapped to do the job. Eastwood is fine in this role, and I think we will likely see his role grow in this franchise. Paul Walker was well loved in his portrayal of Brian, but he was never really an amazing actor, so I don’t necessarily think Eastwood is in over his head here. However, the main villain of The Fate Of The Furious is played by a very accomplished actress, Charlize Theron, who is coming off a very hot action role in Mad Max: Fury Road. Unfortunately, Theron isn’t really given much to do here, and as a result her character is underwhelming. Perhaps when the next sequel comes out, and she inevitably finds herself on the good guys’ side (like The Rock before her, or even Jason Statham in this one) she will have better luck. On that note, Statham is probably the best thing about this movie. He has a certain type of charm that fits this franchise perfectly. He just seems right at home here. Interestingly, the production of The Fate Of The Furious has been overshadowed by a rumored beef between the film’s two alpha-malest stars, Vin Diesel and Dwayne Johsnon (The Rock). This falling out manifested itself on Twitter at the tail end of the film’s production, and the cryptic nature of the jabs has led to plenty of speculation: Is the animosity real? Is this what happens when giant egos collide? Is this all just a sham, fabricated to promote an upcoming Wrestlemania? Stay tuned! Come at me bro.

The Fast and Furious crowd is gonna love this one, for sure. It’s got plenty of exactly what that particular demographic is looking for: action, chicks, bros, and so on. While that should turn off the more serious filmgoer, I plead to them to give The Fate Of The Furious a chance. They might just decide that it’s actually a lot of fun, and (gasp) not really that bad. At this point you can’t argue that this franchise is the current torch bearer for pushing action movies to the limit, and for that reason, I ain’t hatin’. Trust me, I thought it was a given that I was gonna hate all these stupid Fast and Furious movies, but much to my surprise, I actually kind of dig them. Some of them, that is. This is truly a guilty pleasure for me, and I no longer feel shame in saying I had fun at a Fast and Furious movie. So check it out. You just might find you agree.

May 10, 2017
Movie Reviews Movies Reviews No comments jefffeuerhaken
← Coming Next Month – May Music Review: At The Drive In – Inter Alia →