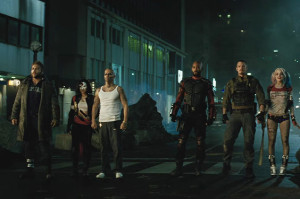 DC comics and Warner Bros. found themselves in a peculiar place after their latest megablockbuster, Batman V Superman, was met with unprecedented polarity from fans and critics alike. Some loved it, some loathed it, and despite the fact that the film made a bajillion dollars at the box office, it was hard to qualify as a total success. For better or worse, there are obvious comparisons to draw between the expanded universes of both the DC and Marvel franchises. In recent years, Marvel has continued to put out box office smash after box office smash, scoring not only with the fans but also with reviewers, as evidenced by Rotten Tomatoes scores climbing into the 90%+ range. Batman V Superman, on the other hand, teetered somewhat humbly around 25%. Clearly, the DC franchise was missing something, or falling short in areas where Marvel has been able to excel. As a result, the DC studio was compelled to adjust their focus and expectations for the latest DC entry, Suicide Squad, director David Ayer’s new supervillain-centric caper film. More pressure was put onto the film’s shoulders, especially after the particularly strong positive response to early trailers. DC was counting on Suicide Squad to effectively right the ship and chart a course for the future of the franchise. Fans hopes for the film were equally high as a result of a strong and successful marketing campaign. So now that the film has arrived in theaters, what’s the verdict? Did Suicide Squad live up to it’s lofty expectations? The tone of the film is dark, but fun.

Well, yes and no. For those that haven’t been paying attention, the critics’ reception to Suicide Squad has been just as lukewarm as Batman V Superman, and the fans’ reaction just as mixed. It’s a problem of more of the same product coming when most were hoping for something special. I understand the disappointment. I, too, felt the film fell short of my expectations. However, I’d make the argument that Suicide Squad is a far more enjoyable product than BVS. It suffers from the same dark color palate that so many of BVS‘ critics railed against, but I felt the tone of the film had a pronounced difference from BVS. Sure it looked dark, but it felt like a lot more fun. It was campier, less serious, and had an engaging stylistic flair. It’s not aiming to be highbrow entertainment or anything, but it does raise some interesting questions about the thin line between good and evil. 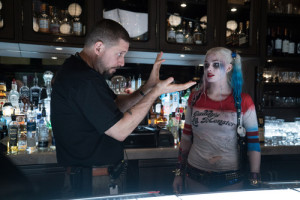 Director David Ayer shows Margot Robbie how to do a Street Fighter-style “Hadouken”.

The story itself, however, is a bit of a misfire, which could possibly be attributed to rumors of a rushed script and studio intervention, or perhaps the script was never strong to begin with. In any case, the editing of the film seems to have suffered as a result. For example, I found it odd that some of the protagonists were given elaborate introduction scenes while others weren’t. It’s true that certain characters turned out to be more important than others, but it seemed it would have been more fun to avoid telegraphing that too early, and instead let the audience discover the significance of each character as the story progressed. In fact, one particular character is killed off before we even have a chance to spend any time with them, which I found odd and a bit jarring. Another example of how the editing was compromised is during the sequence where we are seeing the villains beginning to execute their plan, intercut with the squad assembling. The edit makes it seem like these two actions are occurring at the same time, which would be fine if one event wasn’t happening during the day, and the other at night. Hmmm….There are some other minor slips of story logic that left me scratching my head, one involving the entire purpose of the mission at hand, but even these didn’t take me out of the story as much as the jumbled story structure. 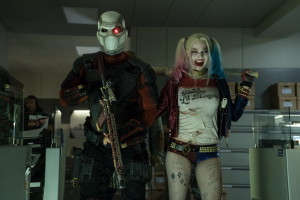 On the other hand, this cast is killer. Exceptional performances can no doubt be expected from such exceptional actors, and for the most part, they deliver. Clearly, Margot Robbie, as Harley Quinn, the Joker’s twisted, devoted love interest is a standout. Aside from the physical gifts on display, she is mesmerizing on screen. She is obviously aware of what kind of movie she’s in, because somehow she’s able to walk the line between over-the-top campiness and nuanced sincerity, suggesting there’s more to her character beneath the surface. Will Smith, in a rare role without sole top billing, reminds us of his considerable talents in his rendition of Deadshot, the deadly assassin with perfect precision. Smith shines in the role, seamlessly incorporating his own blend of comedy and action. Joel Kinnaman, Jai Courtney, Jared Leto, and Cara Delevigne are all great in supporting roles, but special mention must be given to Jay Hernandez as Diablo, the fiery, tattooed gangster. Hernandez brings both weight and subtlety to his character, and he’s able to convey an intense inner conflict without going overboard. 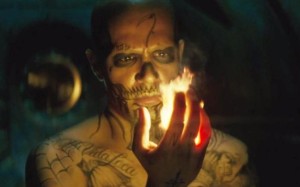 Jay Hernandez is on fire in this movie.

Sure, Suicide Squad has some problems. But, as in the case of BVS, I feel all the internet hate floating out there has little merit. I’m not making a case to rain accolades down on this film, but to compare it to something like last year’s abysmal Fantastic Four is unnecessary hyperbole. This film is what it wanted to be, no more, no less. It’s a fun comic book action movie with a unique twist in the premise. You can look at the sum of its parts and argue that so much talent involved should have resulted in a masterpiece, and I won’t argue with that. Because it is by no means a masterpiece. Nevertheless, it’s a good-time summer action flick, and for that, I won’t buy into the hate. I’m very curious to see what DC brings next with the Justice League and Wonder Woman movies peering over the horizon. Perhaps one of these will give the DC studio the boost it needs to stand on the same plane as Marvel.