The Nice Guys Is Quite The Pleasant Surprise

I went in to my screening of The Nice Guys fairly fresh. I was aware that it starred Russell Crowe and Ryan Gosling, that it was directed by Shane Black, and that it was set in the 70’s. But that’s as far as my knowledge went. I didn’t know what the story was, and I hadn’t even seen a trailer yet. Regardless, the buzz on this film was good, and therefore I was hoping it wouldn’t disappoint. So I grabbed myself a coffee and set myself down in my cushy seat, hoping to at least be entertained. By the end of the very first scene, I instantly knew I was in good hands. This was going to be a fun ride. By the time it was over and the credits were rolling, I had to sit there for a moment and wonder when the last time was I left a theater feeling so pleasantly surprised. The Nice Guys is a hell of a film, and one not to be missed. 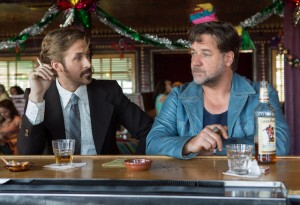 For those who were dubious of the pairing of Russell Crowe and Ryan Gosling as a Jackson Healy and Holland March, a duo of semi-bumbling private detectives, fear not, for this is a match made in movie heaven. The manner in which the two actors riff off of each other is equal parts charm and hilarity, and each is given their time to shine and their time to support. I was genuinely surprised at how often I found myself (and the whole theater, for that matter) laughing out loud at these two actors who are known primarily for their dramatic chops. For all the Oscars and critical acclaim between them, make no mistake, these dudes are very, very funny. One other member of the cast that definitely deserves mention here is Angourie Rice, a young Australian newcomer who plays March’s daughter, Holly. Holly is the true heart of this film, providing our misguided heroes a moral compass and guidance when things get gnarly, and they get quite gnarly. The character of Holly is well written (we’ll get to the script in a moment), but young Rice’s performance is exceptional, which is no small feat considering the caliber of actors opposite her. She not only holds her own with the big dogs, but manages to steal some of the scenes. She taps into the modern audience’s appeal to reason when the two leads are going about their business the old fashioned way. 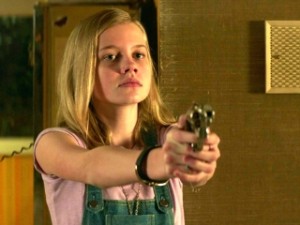 Angourie Rice is not to be F’d with.

It not just the characters, however, that elevate this film to such heights. The real star of The Nice Guys is the phenomenal script from the film’s director Shane Black (Iron Man 3, Kiss Kiss, Bang Bang) and Anthony Bagarozzi. The story centers on a 70’s era L.A. noir story, and it’s a blast to uncover all the connections between a collection of zany characters at the same time as our protagonists. The Nice Guys is essentially the love child of The Big Lebowski and Chinatown, but with much more humor. The dialogue is particularly witty, and there are some great callbacks and surprises to keep things interesting. Black does a great job behind the camera, as well. The performances are all consistent, and the visuals are striking and engaging. Simply put, the film establishes an immersive world that’s super fun for the characters to play in. 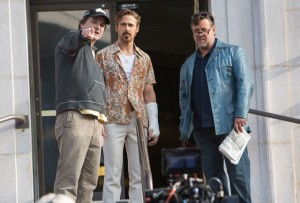 For those of you who, like me, hadn’t really had this film on your radar, I strongly recommend going to see it. Shane Black is a talent to be reckoned with, and both Gosling and Crowe provide a fresh new take on the buddy-cop angle. If you like noir-style crime thrillers, or are a fan of well-written movies, or just curious about seeing these two leads in a comedy, there are certainly worse ways to spend a couple hours than checking out The Nice Guys. I suspect you, too, will find this little gem to be quite the nice surprise.