If you’re like me, the first thing you thought of when you heard about Disney rolling out another live action remake of one of their animated classics was that The Jungle Book would be another case of milking the cash cow for all it’s worth. We’ve seen the formula work before to varying degrees of success. Tim Burton’s Alice In Wonderland made truckloads of money, but fared much worse with critics. Last year’s Cinderella may not have made as much money as Alice, but was generally considered a better movie. Then there was the anomaly Maleficent, which was a hybrid prequel/retelling of the Sleeping Beauty story. It was fine, but after seeing these films I had to question Disney’s motives for this new trend. Sure, they want to squeeze out more money from their most beloved properties. Sure, it seems like a safer gamble than introducing new characters and stories. However, the one thing I kept going back to when thinking about these films is that the whole approach just seems lazy. That is, of course, before I until Jon Favreau’s masterful new imagining of The Jungle Book.

I have to admit, I wasn’t that surprised at how much I loved this film, because the buzz from early reviews and word of mouth was that it was sensational. After seeing the film, it’s hard to argue. The film is visually stunning, showcasing some absolutely groundbreaking VFX work, but the integration of the characters and the story are what make The Jungle Book so special. From the very first shot, which is a pull back from the iconic Disney castle logo into the undergrowth of a mysterious dense forest, I could tell that this film was going to be more clever than lazy. The updated versions of all the main characters from the original story was handled quite nicely as well, and the voice cast is superb. Bill Murray is spot on as Baloo, Idris Elba nails Shere Khan’s sophisticated menace, Ben Kingsley is fantastic as Bagheera, Christopher Walken does the creepy Walken thing with King Louie, and Scarlett Johansson’s soothing, yet deadly voice as Kaa is spellbinding. All of these voice talents are assisted by what are quite possibly the most beautiful CG animals ever rendered. The talent of the VFX artists deserve special mention here, because they’ve truly outdone themselves with these characters, so much so that as an audience we tend to forget that this “live action” version of the film is hardly “live” at all. Watching all of these digital characters interact with Mowgli and each other, whether they are speaking, dancing, singing, fighting, or just being cute, makes it clear that this film has raised the bar in the world of VFX. 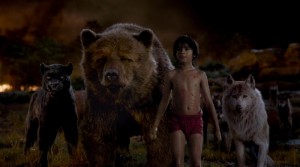 Most viewers are no doubt familiar with The Jungle Book story, and while this version makes no attempt to reinvent the wheel, it does put  more of a focus on the characters and the themes. What results is a film that incorporates elements of adventure and drama while also saying something meaningful. Of course the theme of the misfit outsider searching for his place in the world is nothing new, but in The Jungle Book it’s handled in a way that doesn’t beat you over the head with it, or distract you from the thrills and charm of the character interactions. Most of the plot beats from the original film can be found here, as well as a few of the original songs, but Favreau has tackled these familiar elements from a fresh perspective, and therefore the film never quite ventures into rehash territory. A key example of this is during Mowgli’s encounter with Kaa, the deadly Anaconda. While the original version rides on the goofiness of the Kaa character, which mirrors Mowgli’s own sillier tendencies, this new version of Kaa is truly hypnotic and seductive. Johansson’s silky voice, enhanced by some stellar sound mixing, soothes Mowgli (and the audience),removing his defenses before attempting the fatal strike. This makes for a much more adult version of the scene, but also results in a unique break in the action while also providing some exposition to boot. All in all, it’s a superbly crafted scene that illustrates Favreau’s directorial prowess. 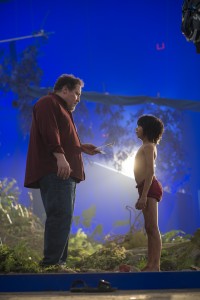 If you enjoyed The Jungle Book as much as I did, you may be delighted to hear that a sequel is already in the works. Normally an announcement such as this would elicit an eye roll, but with the property in such capable hands, I have no cause to expect anything less than another solid hit. In a strange turn of events, we may actually be getting yet another live action version of The Jungle Book even before the sequel comes out, this one directed by motion capture guru, Gollum himself, Andy Serkis. This version was originally titled Jungle Book Origins, but it now appears that was only a working title, and it’s likely to be called something else upon release. The Serkis version also features an impressive cast, including Benedict Cumberbatch as Shere Khan. Hopefully, we get another great Jungle Book movie and avoid Jungle Book overload, but after Favreau’s version of the film, it’s clear that Serkis has some mighty large paws to fill.