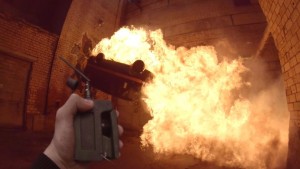 Despite Its Flaws, Hardcore Henry Is A Game Changer

In a film industry determined to seek out any possible method to eliminate risk, what we’re unfortunately left with is a vast array of copycats and lookalikes. The big studios are afraid to put out any product that has potential to miss its mark or alienate filmgoers. So now we’re living in the age of the safe bet, and that’s why we’re flooded with superhero origin stories, film-by-numbers horror flicks, and endless sequels, prequels, reboots, and requels. It’s because of this saturation of cinematic clones that anything fresh and original is all the more welcome. In this respect, Hardcore Henry, the new ultra-violent, action packed, stunt spectacular from writer/director Ilya Naishuller, is a much needed breath of fresh air.

For those who haven’t seen any of the marketing campaign for this film, it that relies almost entirely on its hook: the entire movie is shot from a first-person perspective. Picture a first person shooter type video game, but with live action, and that’s basically the gist of Hardcore Henry. The story revolves around the titular character, who at the outset of the film awakens in a lab with no memory or ability to speak. We learn quickly that he has been retrofitted with some mechanical limbs and organs, and that his doctor is none other than his own beautiful wife. When the film’s antagonist invades the lab facility and ultimately kidnaps his wife, what follows is a wild roller coaster ride of action and stunts, followed by more action and stunts, that proceed until the film’s partially rewarding climax.

I gotta be honest here. As soon as you begin to analyze the plot and story beats of this film, it topples like a house of cards in a wind tunnel. Motivations are weak and unclear, and there is zero character development. The fun of the film, however, isn’t in character analysis. It’s in the discovery of what exactly is going on, which we of course learn along with Henry. The story is clearly not the focus here. Rather the price of admission is paid for the riveting stunts and cinematic magic tricks. If you go into this film expecting jaw dropping moments of “how did they DO that?!”, you absolutely will not be disappointed. The stunt work in Hardcore Henry is both beautiful and breathtaking. And the choreography of the action bits, which usually consist of long takes, is nothing short of remarkable. The stunts are the main attraction.

Most of the cast of this film is comprised of anonymous evil henchmen living out their final moments of life. There are three actors, however, worth mentioning. Sharlto Copley channels his inner Orphan Black to give us a squadron of unique, zany, over-the-top characters that help to guide Henry through his quest. When we ultimately discover the reason for all the iterations, however, there is very odd sequence involving a musical number that took me out of the film completely. Haley Bennett gives a decent performance as the easy-on-the-eyes damsel in distress, but she’s really not given much to do in the film. Russian stage actor Danila Kozlovsky plays the villain of the piece, a mustache-twirling psychopath with unexplained superpowers. His performance is fine, but I was distracted by his unnerving habit of never quite looking directly at the camera (and at Henry), and the fact that he looks exactly like a Russian Bert McCracken (lead singer of The Used). 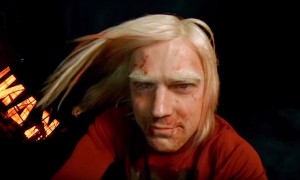 Hardcore Henry isn’t for everyone. If you tend to have bouts of motion sickness, you might not make it through this film. The super shakey-cam may give you an initial headache, but I found that after the first 20 minutes or so, you kind of get used to it. Also, if violence makes you queasy, I strongly recommend you avoid this film, because it pulls no punches whatsoever. On the other hand, if crazy action and stunts are your thing, or if you’re just curious to see how this new cinematic technique turned out, then Hardcore Henry is an absolute must-see. What it lacks in terms of the criteria of a traditional film, it way more than makes up for in its unquestionable originality. I can tell you right now, that Hardcore Henry is merely the first in what is sure to be a long line of these first person style films. If you want to see what could very well be a glimpse into what the future of cinema might look like, then get your butt to the theater right away.