Weezer’s Return From The Commercial Mainstream Is Strong, But Suspiciously…Commerical

Weezer is back with yet another entry into the “self-titled” series with the eponymous “White Album“. This is an album that many have hoped would be a return to form in the vein of their previous self-titled efforts. Fans of the band have long hoped for the band to alter their career course trajectory back towards the familiar beloved sounds of “The Blue Album”, and perhaps to a lesser extent, “The Green Album“. The past few albums have featured a Weezer that seemed to be constantly vying for mainstream relevance, and in a way, they’ve succeeded. However, the music contained in these albums have been a point of contention among the band’s oldest and most devoted fans. These are the ones who have been hoping for the band to abandon the more commercial sound for a return to their relative roots with “The White Album“. So now that the album is out, what’s the verdict? For the most part, I think the fans are getting exactly what they asked for, meaning that there are definite sonic similarities to the “The Blue Album“, etc. However, the evolved, updated rendition on this sound is somehow, well, commercial. Video still from “King Of The World”

Allow me to explain. It’s not necessarily that the band is holding their finger to the pulse of what is contemporary and following along, it’s just that this version of Weezer puts out certain songs that sound like they’d be right at home in a McDonald’s or Coca-Cola commercial. I’m talking simple piano riffs (which there are A LOT of here) and mellow, catchy, easily digestible melodies that are universally inoffensive, if unremarkable. In the humble opinion of yours truly, these songs are the moments where “The White Album” falters. But let me also state that there are just as many moments on the album that successfully capture the Weezer vibe that catapulted the band into a radio and video success in the 90’s. The album’s opener, “California Kids“, is what you would hope to hear if The Beach Boys in their prime had hopped into a Delorean, gunned it for 88 mph, and time traveled to a modern-day recording studio. The choruses in this song (and most of the album, for that matter) are memorable, even hummable. Vocal melodies have always been Weezer’s strong suit, and Rivers Cuomo sounds better than ever. Other strong tracks on the album are the Buddy Holly-ish “Summer Elaine And Drunk Dori“, the palm-muted, half-time number “Do You Wanna Get High?“, and the closer “Endless Bummer“, which is a slow-burn build from acoustic chillness to a full bore rock out ending. 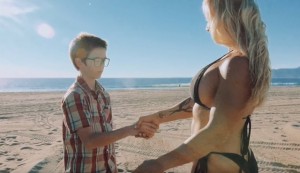 The three featured tracks that have been given the music video treatment, “Thank God For Girls“, “King Of The World“, and “L.A. Girlz“, are not as strong as some of the other material on the album. These songs bring to mind some of the more recent Weezer releases. But if music videos of things happening in super slow motion are your thing, you are in for a treat. Overall, “The White Album” has a lot of good things going for it. I would rate it as one of the band’s stronger releases. Some of it works for me, but some of it does not. I can get down with the classic Weezerishness of “California Kids“, but I can’t listen to “(Girl We Got A) Good Thing” without picturing a commercial for Old Navy or something. If you are one of the classic die hard Weezer fans I was talking about earlier, or if you are a younger, more recent follower to the band, I’m sure you’ll find something you like on “The White Album“. And if you’re an ad exec for Coca-Cola, get to work on some licensing deals. You’re welcome, but gimme my cut.