All Jokes Aside, NOFX Gets Personal In First Ditch Effort

There are precious few bands in the punk rock scene that have been able to thrive and maintain relevance throughout the decades of the genre’s lifespan. Of course we’ve seen the ever-increasing legions of early 80’s pioneers creep back into the fold, but these glorious reunions sometimes come across as cheap cash grabs. The legends strap their rusty guitars back over their aching shoulders primarily for the benefit of milking their legacy music through a spattering of live shows. Nostalgic fans and punk newcomers alike pay their respects through the purchase of a T-shirt along with the inflated ticket prices. I mean, they may stilll sound great live, but when was the last time Agent Orange put out a new album? A lot of these guys have been playing since the 80’s, but you’re not doing your homework (or you’re in denial) if you don’t recognize some curious time gaps in some of these bands’ activity. On the other side of the coin, you have the true punk lifers: The Bad Religions of the world, The Social Distortions, hell, even the Green Days. These guys jumped on the scene and never left, constantly recording and touring, further cementing their punk rock legacy with every album cycle. Which brings me to NOFX.

It may be hard to believe, but NOFX formed in 1983. That was a hell of a long time ago. That year brought us Minor Threat’s Out Of Step and the first Suicidal Tendencies album. NOFX may have been too young for the initial late 70’s punk explosion, but they were indeed there back in the “old school’ 80’s. So now it’s 2016, and NOFX has given us another full length album, First Ditch Effort, their first since 2012’s Self-Entitled. The reason I wanted to bring up the timeline of NOFX’s long history is that it seems with each new album, they’re coming to embrace the sounds of those early years more and more. NOFX boasts musicianship far beyond what most of those early bands could even fathom (See The Decline, 1999), but with First Ditch Effort, that musicianship is actually less of a focus than ever. The emphasis is more on what the band, or perhaps more specifically frontman/bassist Fat Mike, has to say. And he has to say a lot, and let me tell ya, it ain’t all pretty. Let me elaborate. If you’re at all familiar with NOFX’s music, then you’re no doubt aware of the role humor tends to play in the lyrics. You’ve got songs like “Please Play This Song On The Radio” which ends in an expletive-laced rant against radio station DJ’s (although ironically, I once heard this song on the radio in Hawaii once, it cut out before the naughty words), or “She’s Nubs”, a fun little ditty about a quadruple amputee, or even the song that addresses the timeless debate of whether or not clams have feelings, the aptly titled “Clams Have Feelings Too (Actually They Don’t)”. Based on this body of work, many have drawn the conclusion that NOFX is a band that chooses not to take matters too seriously. With this back catalog in mind, I was genuinely caught off guard by the darkly honest and vulnerable content of some of the lyrics on First Ditch Effort. Hearing songs like “Father’s Day”, “I’m A Transvest-Lite”, and “Deadbeat Mom” at first had me smiling at Fat Mike’s penchant for clever lyrics, but upon further review I thought, “Wait, I think he’s actually being serious…” It was a strange revelation, but when you think about it, aren’t most comedians like that? They tend to laugh at their problems as a method of dealing with them. The songs on this album represent a man dragging his demons into the light and poking fun at them as a coping mechanism. 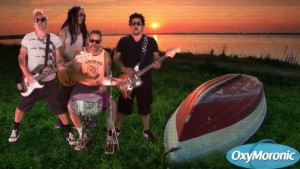 Listening to NOFX may have sideFX.

Lyrical content aside, there are a number of the eclectic musical moments that you come to expect in a NOFX album, such as the lo-fi jazzy intro on “Bye Bye Biopsy Girl”, or guitarist El Jefe’s trumpet solo on the breakdown of “California Drought”. Curiously absent, however, is any trace of the blistering double-time beats the band had built much of their earlier career on. There are some faster tunes on the album, but none of the hyper fast (think “Linoleum”) stuff. All in all, I have to commend NOFX, and Fat Mike in particular, for thinking a little outside the box and going for something a little different on First Ditch Effort. I can imagine that when you’ve been playing for 34 years, it must get easy to find yourself in musical and lyrical safe zones, and both of which are strayed from here. I must admit, the lyrical content pushed me in directions I found less relatable than I’m used to in a NOFX album, and I was a bit thrown by all the dark themes, but the music is still more or less familiar. First Ditch Effort may be somewhat of a departure for these punk hall of famers, but is nonetheless a solid album.