Rogue One, The First Of The Star Wars Spinoffs Lives Up To The Hype

When Disney bought Lucasfilm for over $4 billion in 2012, the main intention was to resurrect the Star Wars franchise and milk it for all it was worth. Prior to the release of Episode 7: The Force Awakens, we learned that Disney had a unique plan up its sleeve in terms of the release schedule. Starting with Episode 7, there was to be a new installment in the ongoing Star Wars saga every other year (the numbered episodes), and in the off years, Disney would release a standalone spinoff film. These spinoffs had no story criteria except that they had to inhabit the Star Wars galaxy. We all know by now that last year’s Episode 7 went on to be a massive commercial and critical hit, but there have been a reasonable number of questions and concerns regarding how Rogue One, the first of these Star Wars spinoffs, would pan out. For one, the film features an almost entirely new cast of main characters (although there are certainly a number of fan-service-type cameos). Then there was the confusion factor. It’s entirely possible that the most casual of viewers could go in expecting a continuation of the saga story and leave the theater frustrated, regardless of the quality of the story told. Then there were the reshoots. When news broke that Disney had ordered a series of reshoots late in the production schedule, some had feared that perhaps the film wasn’t in the most capable of hands. Director Gareth Edwards, despite proving his blockbuster meddle in his big-budget adaptation of Godzilla, still doesn’t possess the clout as a household name such as J.J. Abrams. For these reasons, and many more, Star Wars fans have eagerly been holding their breath in anticipation of this new breed of Star Wars movie. Will Rogue One deliver and give us A New Hope? Or are we looking at another Phantom Menace?

Now that Rogue One: A Star Wars Story is here, fans are not only breathing a collective sigh of relief, but many have been caught breathless at the spectacle of this film. Although the film hits all the necessary character beats to keep us invested in our misfit band of protagonists, Rogue One is all about the action. And in terms of Star Wars action, it’s fresh and new. Gone are the dramatic, one-on-one lightsaber battles, or relying on the magic of the force to defeat evil. Instead, what we have is more like the bastard love child of a war movie and a heist flick . For those who have yet to be brought up to speed, the central plot of Rogue One focuses on a small but determined band of rebel fighters who team up in a covert mission to steal the plans for the Empire’s deadly new weapon, the Death Star. Jyn Erso (Felicity Jones) has learned through her father, a reluctant Death Star engineer (hey, maybe they had great benefits), that he had built a weakness into the structure that, if exploited, could destroy it entirely, thus ensuring the safety of millions of innocent aliens across the galaxy. If you’ve seen the first Star Wars film from 1977, we’re talking about the very same weak point Luke Skywalker is honed in on during the film’s climactic trench run.

Rouge One does a great job of capturing the feel of the OG Star Wars flicks.

Spoiler alert: the Rogue One team does succeed in stealing the plans, paving the way for the events of the 1977 film. The integration of the Rogue One story into the overarching plot is actually kind of brilliant, and credit must be given to the screenwriting efforts of Tony Gilroy, Chris Weitz, Gary Whitta, and John Knoll for the story’s seamless integration into the saga. The world in Rogue One feels familiar, almost like we’ve been transported back in time to late 70’s and the origin of the franchise. Fans familiar with the story will no doubt see where it’s all headed by the time we get into the film’s epic final act, which plays like one giant action scene, broken up by changes in perspective from one group of rebels to the next. Even though logic tells us that the film must end with the rebel’s success, it is the way we get there that makes it so thrilling and fun. Plus, the novelty of seeing the film end just moments before the opening scene of A New Hope was immensely satisfying.

That final act is a doozy.

Any fears about Gareth Edwards’ ability to helm a monster this size can be safely put to rest, as he’s done a fantastic job of bringing back the magic and wonder from the original films, while at the same time incorporating modern visuals and storytelling techniques. The performances he was able to capture from the actors are for the most part adequate and convincing. The standout, however, is the movie’s primary villain, Krennic, played by Ben Mendelsohn. Mendelsohn succeeds in creating a character that is fearsome and yet somehow sympathetic. His ambitions are his greatest asset, yet at the same time contribute to his downfall, and watching his descent and comeuppance is a rewarding experience. Although the visual fx of the film are top notch, many will no doubt take issue with the CGI versions of Peter Cushing and Carrie Fisher. That technology is damn good, but not quite invisible as of yet. Maybe in a few more years… 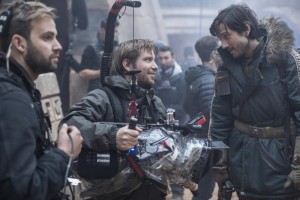 I’d recommend for just about anyone go out and see Rogue One in the theater. I took my brother and sister, and they both had a great time. My brother rarely goes to see movies, and he absolutely loved the experience, especially in 3D. Fans of the Star Wars franchise shouldn’t need much convincing (that is, if any of them actually haven’t seen it yet). Besides, other than a few random gems, the blockbuster action films of 2016 have been as a whole disappointing, so it’s nice to end the year on such a high note. And don’t forget that Star Wars Episode 8 will be here before you know it. Hopefully Rian Johnson can keep the hot streak going. May the force be with this franchise. Always.